Jon joined Underdog in 2006 and is the lead vocalist as well as Bass player. 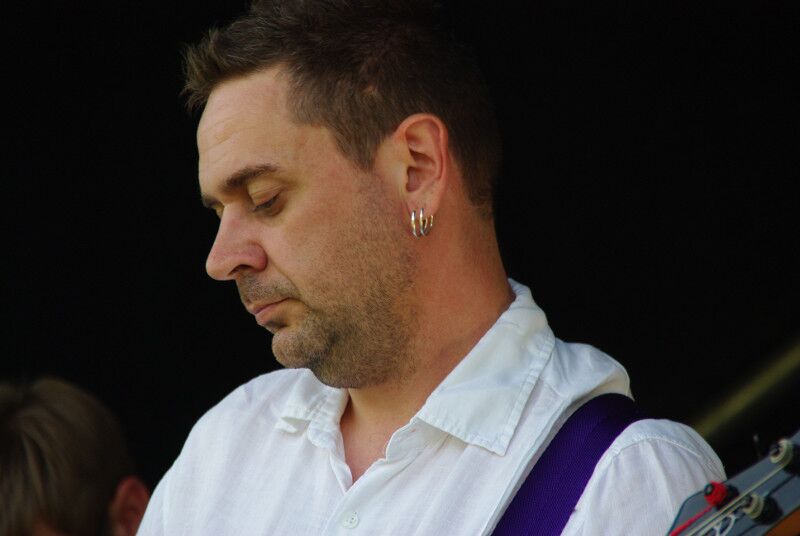 1) When were you happiest?

I remember being immensely elated on a train back home once.  It was the first really warm sunny day after a long, cold and dark winter; I’d cracked open a can and I felt like anything was possible. I’ve since found out that the elation was probably because I wasn’t particularly well and if I feel like that again I should be careful.

2) What is your greatest fear?

Living in a country controlled by a right-wing elite that haven’t the faintest idea how most people actually live day-to-day;  who systematically rip apart the things the country should be proud of, like the NHS and universal education, for ideological reasons while pretending it’s all to save money………….oh…..er..… Bollocks.

3) What is your earliest memory?

Going to the seaside with my family and wandering off because of all the flashing lights in the arcades.  I was happy as a pig in shit for about 5 minutes until I realised that I didn’t know where anyone was.

4) Which living person do you most admire, and why?

Stephen Hawking – that’s a lot of shit to think about just in your head.

5) What is the trait that you hate in yourself?

6) What is the trait that you hate in others?

Racism, wanton stupidity, belief in the supernatural whether that be gods, ghosts, lucky numbers or homeopathy. Plenty there – take your pick.

7) Apart from property and cars, what’s the most expensive thing you ever bought?

8) What is your most treasured possession?

9) What would you super-power be?

Mind reading – I haven’t got a clue what you’re all thinking most of the time.

10) What makes you unhappy?

11) What do you most dislike about your appearance?

That me and Johnny Depp are not identical twins.

12) What is your favourite word?

Haven’t got one.  How can you know which one you might need next?

13) What is your most unappealing habit?

14) If you could bring something extinct back to life, what would it be?

I was going to say something smug like “the innocence of youth”, but youth is shit, you’ve got no money and no idea how to do stuff.  Mammoths would be a useless choice because they’ll just go extinct again in 50 years when all the ice has melted.  So I’m going for Neanderthals.

17) Which words or phrases do you overuse?

Working in this enormous freezer making sure that scallops were exactly 10% water/ice.

As long as I could come straight back I’d go back to October 22nd, 4004BC.  Just because that would fuck the creationists off.

Apparently I don’t according to Johnny (Morris not Depp).  Always got stuff happening – currently I’m writing this, listening to Hole, writing a University dissertation, playing an online game and googling the date the date creationists think the world was made (see last answer).

21) What single thing would improve your quality of life?

Not being told I’ve not got the job “because I’m too capable and it would bore me” would be a start at the moment.

22) What do you think of as your greatest achievement?

Not being dead yet – hardly an achievement given that I’m writing this but it was touch and go for a while there.

I don’t care, not like I’ll be here to be either smug or offended.

Sorry, no Tweets were found.